4 + 1 spin-off
Hige wo Soru. Soshite Joshikousei wo Hirou. (ひげを剃る。そして女子高生を拾う。, Higehiro: After Being Rejected, I Shaved and Took In a High School Runaway), or simply Higehiro (ひげひろ), is a romantic comedy light novel series written by Shimesaba and illustrated by booota. It began serialization online in March 2017 on Kadokawa's user-generated novel publishing website Kakuyomu. It was later published by Kadokawa Shoten with three volumes since February 2018 under their Kadokawa Sneaker Bunko imprint. A manga adaptation has been serialized in Kadokawa Shoten's shounen manga magazine Monthly Shōnen Ace since November 2018 with art by Imaru Adachi. A manga adaptation of the light novel spin-off Each Stories was serialized in ComicWalker and illustrated by Hitomi Baramatsu. The manga is licensed in North America by One Peace Books. An anime television series adaptation by Project No.9 will premiere on April 5, 2021.

Office worker Yoshida has been crushing on his coworker, Airi Gotou, for five years. Despite finally scoring a date with her, his confession is promptly rejected. Drunk and disappointed, he stumbles home, only to find a high school girl sitting on the side of the road. The girl, needing a place to stay the night, attempts to seduce Yoshida. Despite rejecting her advances, he nevertheless invites her into his apartment.

The next morning, the girl, introducing herself as Sayu Ogiwara, reveals that she has run away from Hokkaido all the way to Tokyo. During her six-month spree, she continually traded sexual favors for a roof over her head. Yoshida, however, remains unswayed by her seduction. Instead, he has her do a different kind of work—one that entails washing dishes and doing laundry. And so, a touching relationship between a heartbroken adult and a runaway high school girl begins.

The light novel series and manga adaptation has a total of more than 1.5 million copies in circulation, including digital copies. The series appeared at 4th in the bunkobon edition of Takarajimasha's annual light novel guide book Kono Light Novel ga Sugoi! in 2019.[1] On March 7, 2021, the series held a special stage at the Kadokawa Light Novel Expo 2020 starring the main cast of the TV anime series. 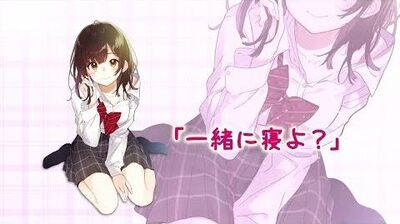 Retrieved from "https://higehiro.fandom.com/wiki/Hige_wo_Soru._Soshite_Joshikousei_wo_Hirou._(LN)?oldid=3252"
Community content is available under CC-BY-SA unless otherwise noted.